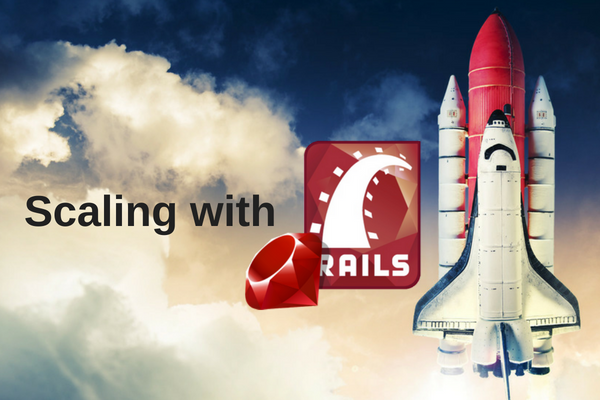 Ruby on Rails is a great framework to work with for startups and smaller applications, but we often come across the scalability issues when the project grows larger. Lets delve deeper into what a frameworks scalability means.

Consider the below  architecture at the start of the Rails project – 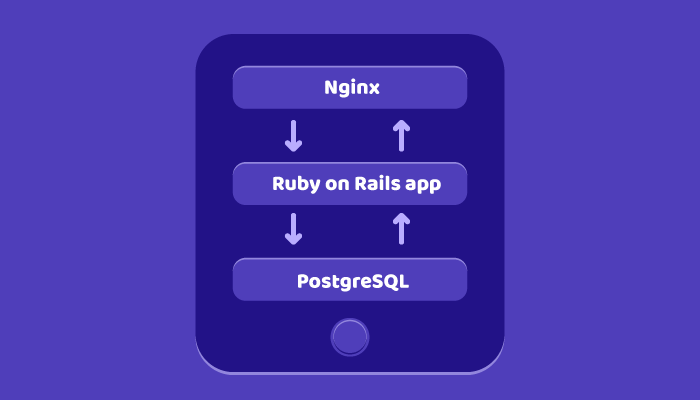 Now this configuration can cope with 1,000 or even up to 10,000 requests per hour easily. But let’s assume that the application became very successful quickly and is now receiving 10 or 100 times more requests. What happens is that the application becomes unresponsive to the users as a single server architecture will crack under pressure of the increased load.

Also known as vertical scaling, it is the simplest way to make the server handle an increased number of RPMs. What you essentially need to do is add more RAM, upgrading the server’s processor, etc. In other words, you give your server computer more power. Unfortunately, there are several issues with this approach –

When vertical scalability is no longer practical, we can look into scaling a Rails application horizontally.

Also known as horizontal scaling, the server and load balancer (Nginx), app instances, and database instances will be located on different servers, in order to allocate equal and smaller loads among machines. 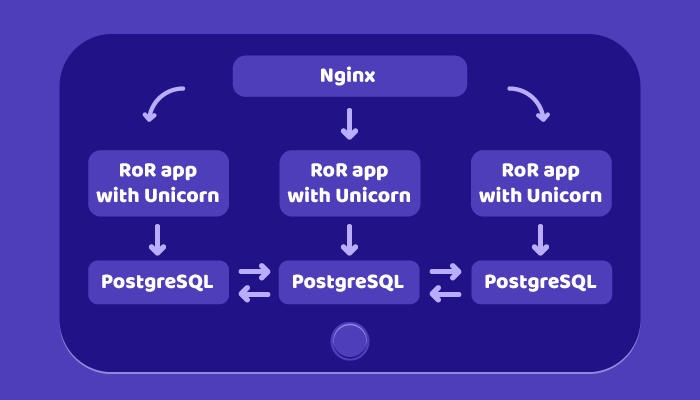 A commonly used server software for Rails applications, Nginx is deployed on a single machine to serve as a load balancer and reverse-proxy. As it requires very little computing power to function normally under high loads, a medium powered server is sufficient.

As we mentioned previously, you need additional servers to run app instances separately from the Nginx server. From the user’s perspective, the app stays the same; they simply access different app instances thanks to Nginx.

Although Rails applications are mostly monolithic, we can extract a functional block and use it as a standalone service. This will also lessen the load on servers.

Another important aspect of scaling a Rails application is scaling the database. To economize we can deploy a database on the same server as the application, but this approach has several drawbacks. Consider an instance where Nginx redirects a user to a different app instance than where their data is stored, they will not be able to sign in because their data is located on a different machine. This happens when every application instance saves and retrieves data from its own database instance, then data for the entire application is spread across many machines.

Keeping the database separate from other servers enables to create a fault-tolerant architecture. This ensures if a database receives too many requests and collapses, the other database instances in the data tier can accommodate this load, and the Rails application will continue to work.

It is always recommended that the database should be transferred to its own server right away, in order to scale the Rails application. A standard procedure for multi-master relationships among databases is to have a tier consist of several machines, with each running databases. In order to update data across all databases, we use database replication. In a master-slave replication variant, databases communicate with the master (or main) database, which stores important data about other databases. All other database instances receive updates only when the master database updates data. Multi-master database replication and master-slave replication are the two common approaches to making our data layer consistent across multiple databases.

There are lots of resources on the web that explain how to scale web applications and how to scale Rails. Let’s say you want to spend as little money as possible on new servers. Is it possible to scale your Rails application while minimizing server costs? Indeed it is.

Take full advantage of Rails’ built-in action, page and fragment caching. Use Memcache to cache results that you’d otherwise pull from your database.

Watch for dependencies on external services like ad serving networks or RSS feeds. If a service isn’t responding or can’t handle your growing request load, make sure that you have a fallback strategy.

Tend your database and your job handlers

Scrub your database periodically for indices that are no longer being used. Similarly, watch the resource consumption of your background and scheduled jobs. As your user base grows jobs can start to overlap, and daily log processing can start to take more than 24 hrs! This kind of thing can sneak up on you easily.