By Sigma InfosolutionsJune 21, 2018 No Comments 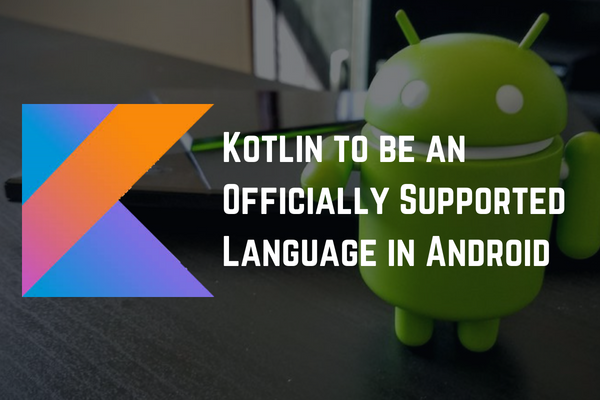 Google at the I/O 2017 Developers Conference meet in May, announced Kotlin- a statically-typed language from JetBrains to be an officially supported language in Android App Development. It will join the list of programming languages used to build the Android Apps like C++, Java. Just within a year of launch, Kotlin has been trending as a top-class replacement of the Java for mobile Apps development. Experts believe that it will not only be limited to a trend but will soon become a standard for Android App Development.

Software Development Company, JetBrains has been working with Java for a long time and was looking for an alternative language that could overcome the disadvantages of Java. It developed Kotlin for JVM (Java Virtual Machine), Android, JS Browser and native applications. Kotlin is an object-oriented language, statically typed and fully interoperable with Java. Kotlin offers some amazing features that support the growth in its adoption by the developers over Java. Let’s take a look at some of its features:

The fact that Kotlin is compatible with Java enables developers to quickly call Kotlin code from Java and Jave code from Kotlin. This feature makes it a uniquely useful language for mobile application development.

According to the Realm Report, the number of applications built with Kotlin has increased by 125% since August 2015 and the Kotlin’s adoption rate has doubled from 7.4% to 14.7%, at the end of September, after Google’s I/O announcement. These numbers prove the liking and advantages Kotlin is receiving from the developers of mobile applications.

Looking at the familiarity Kotlin is gaining over the age-old Java, it is hard to not get excited by the features it has for developers, let us compare both point-by-point and see what it has to offer:

Kotlin was created as an improvement over the Java and not as a completely new language. Java and Kotlin have many syntax similarities and the process of making new classes is identical. So, a coder well-versed with Java will easily adapt to this improved version of Java.

Created to successfully replace Java in the products, Kotlin outshines Java by reducing the volume of coding. It is a compact language as compared to the Java. With the help of the Kotlin Android Extensions, references can be quickly imported into Activity files (within Views) – and then, that View can be used in the code as part of the Activity, which means unlike Java, the developers don’t have re-write the “FindViewById()” method for each case. Kotlin has a large number of small but helper functions and doesn’t need third-party dependency injection tools. You just need to add an additional plugin in the build.gradle file (inside the module) before using the Kotlin extensions.

Kotlin was built by popular IDE vendors who have created Intellij which is the base of Android Studio. So, this clearly depicts that Android studio will be completely supporting Kotlin language ensuring an easy switching from Java to Kotlin for developers. The configuration of new projects on Kotlin is quite simple and just takes a few minutes. Android Studio offers holistic support for all the important activities in Kotlin; whether code navigation, code completion, refactoring, debugging or anything else. 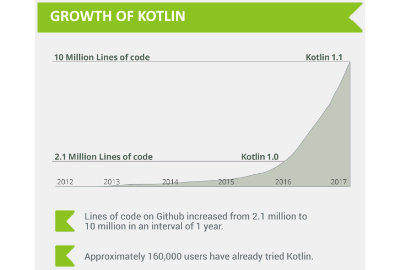 According to Realm Report, 20% of apps built with Java before Google I/O are now being built in Kotlin. It is believed to become more influential in the coming year. Kotlin’s creators at JetBrains would probably agree with this bright vision of their language’s future: they’re currently working on applying certain agile development principles, including continuous delivery, to Kotlin’s development to make sure the language keeps up with industry challenges. Google’s official support for Kotlin as a language for Android development also guarantees that we’ll hear more about it in the future.