Why you need to consider building on React.js 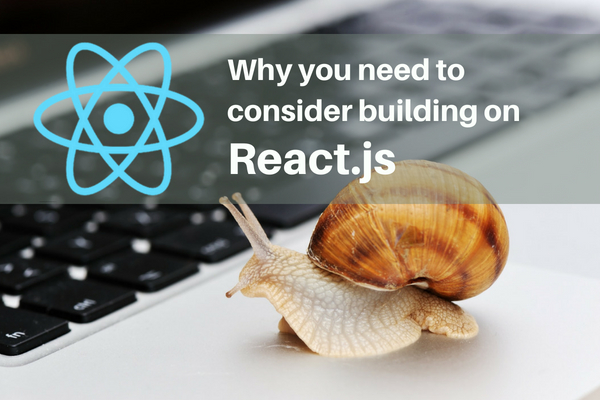 So what is React?

React is a JavaScript library for building User Interfaces. It is often misinterpreted as language, tool, or a framework. To put it simply, React ensures the developers can create large web applications which use data that can change over time, without the need to reload the page. The main goal is to be fast, simple and scalable. React processes only user interface in applications.

It is simply a JavaScript runtime. Lightweight, modern and fast way to execute code

Let’s see why some of the biggest names use react

Interestingly, Facebook created ReactJS library, which is why it is obvious they would use it for the Facebook app. Facebook has recently opened a beta of its completely rewritten ReactJS, called React Fiber.

Instagram is completely based on the ReactJS library with its users completely adapting to its amazing features.The use of ReactJS within Instagram is huge with various features including the Google Maps APIs, geolocations, search engine accuracy as well as tags that pop out without hashtags.

The React version works with Netflix too – specifically on their platform called Gibbon which is used for low-performance TV devices instead of the DOM used in web browsers. There is also an official blog post by Netflix explaining how the ReactJS library helps their runtime performance, startup speed, modularity and various other advantages.

A couple of months ago, New York Times has designed a great new project that simulates different looks of stars on Oscar red carpet. This project’s interface was built in React and allows the users to filter the gallery of different photos from 19 years in a fast and nice way. The re-rendering on this project is one of the impressive features of React

WhatsApp too uses ReactJS for building user interfaces, like the way it uses Underscore.js and Velocity.js as some of its most efficient engines. The newly launched WhatsApp Web app has also been using React.

Let’s look at what makes React this amazing

Imagine a page has a button that changes the color of some text when clicked. It doesn’t make much sense to re-render the entire page for that. React plays smartly here and re-render only the text that changed color and leaves the rest of the page untouched. React keeps a virtual representation of an application’s page structure in memory while comparing it to any incoming changes. Anytime a render is required, React compares the incoming changes to the previous page and only updates the parts that were actually manipulated. This allows React to perform very efficiently and is its most impressive feature.

React strongly encourages the use of components, a huge time-saver when it comes to development. A component could be anything a button, a navigation bar, a registration form, whatever an application needs. Once a component is built, it can be used over and over again throughout an app. Smaller components can be used together to create more complex components and different data can be passed into components to create unique instances. Not only does this save you time but it makes it easy to keep a consistent look and feel across your application.

JSX allows developers to write HTML-like code right into their JavaScript. React takes care of the heavy lifting by transforming the JSX into React compatible code. Most developers are familiar with HTML syntax and it allows them to picture the structure of the component or page they are building more easily.

React is maintained by Facebook and Instagram but also has a great open-source community. There are a ton of React-specific solutions for any problem you may face. There are numerous component libraries that offer different buttons, modals, progress bars and more.

Frameworks like Angular are much more complex and come pre-loaded with many other features. React is flexible in this regard and many times you’ll want to pair React with routing, state management, and other libraries to create a robust application. Even after adding additional packages to a project, React is still extremely intuitive to use.

React has its pitfalls as well, but the pros far outweigh the cons. The virtual DOM makes it extremely fast, component use cuts development time, JSX helps make coding with React feel more familiar, and it’s easy to pick up and get started with quickly.